What are Marine Protected Areas?

Marine Protected Area (MPA) is a general term used to describe an area designated for the protection of natural habitats and/or species in the sea. MPAs can be created to protect economic resources such as fish stocks, to conserve particular habitats or species, or for more general environmental benefits. These areas are typically managed by restricting damaging activities.

Over 96% of the Eastern IFCA district has a marine protected area designation, reflecting the importance of habitats and species in our local seas. The designations include 20 European Marine Sites (Special Areas of Conservation and Special Protection Areas), 15 of which are entirely within the Eastern IFCA district, and five that are partially within the district, and one Marine Conservation Zone. The name, type, location and size of each of these MPAs is shown in Table 1 below. The location of these MPAs is shown in the map below.

(3) Majority of this site is in Eastern IFCA district, but part of it falls within the Kent & Essex IFCA district.

N.B. Many of these coastal MPAs are also designated as Sites of Special Scientific Interest, and Ramsar Sites (wetlands of international importance). Public bodies have additional duties in relation to these designations; Eastern IFCA addresses these duties in parallel with the SAC and SPA requirements, and through liaison with the statutory nature conservation advisor, Natural England. 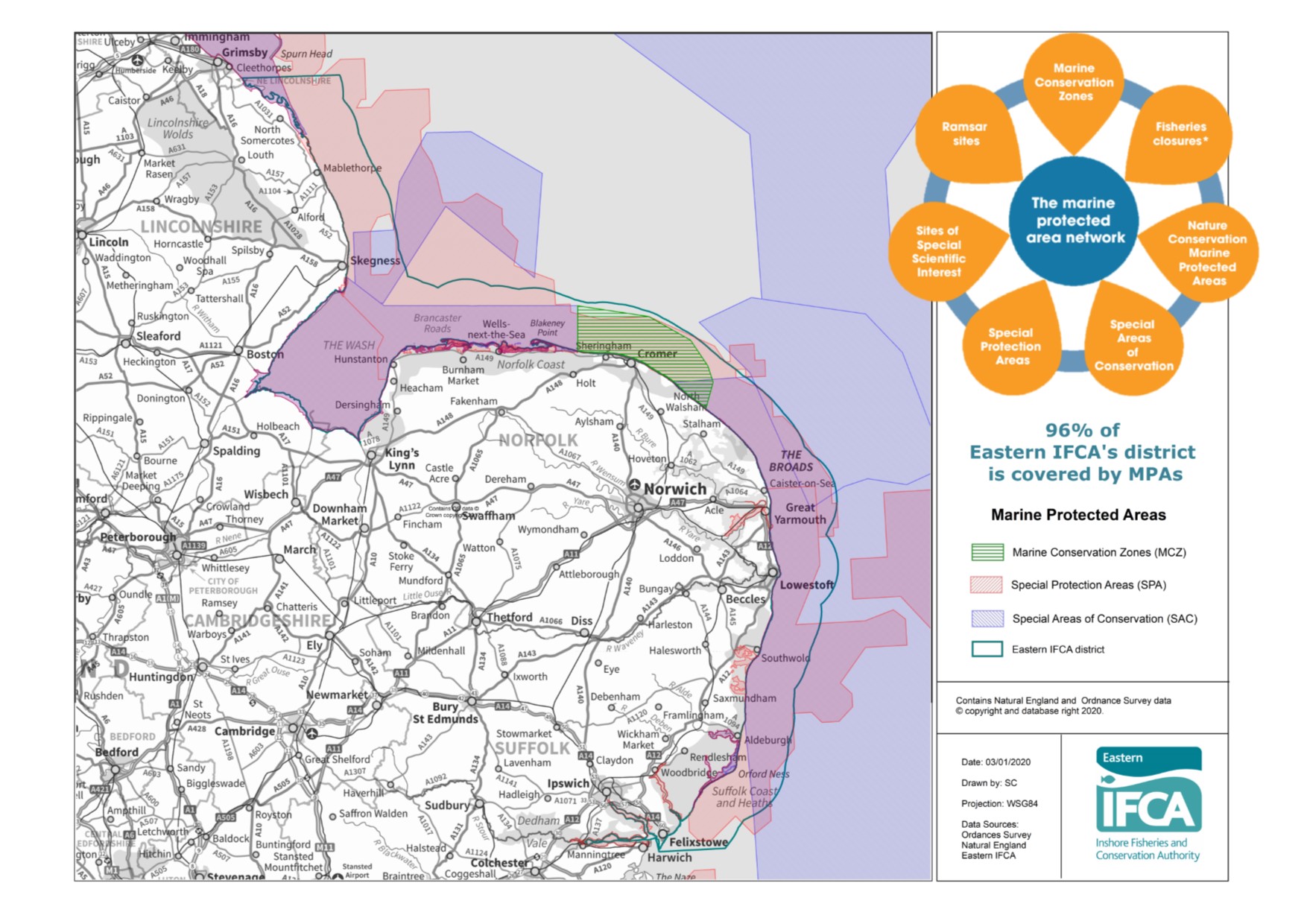 An interactive map showing all of the UK’s MPAs is available here: Map of Marine Protected Areas

There are 2 types of EMS:

Three of the more complex and heavily designated European Marine Sites in the Eastern IFCA district have dedicated management schemes. These schemes involve the coordination of joint-working between regulatory authorities, site and nature reserve managers, stakeholders and local communities to ensure that the duties to the sites are delivered. These duties include ensuring that designated features are protected to maintain or restore their condition, and that activities that fall under the jurisdiction of relevant authorities are effectively managed to ensure they are conducive to the sustainable use of marine resources. Find out more about the three management schemes at the following links:

Marine Conservation Zones form a national network of sites that protect nationally important, rare or threatened habitats or species around the English coast. These are designated under the Marine and Coastal Access Act 2009. There is currently one Marine Conservation Zone in our district: Cromer Shoal Chalk Beds MCZ.

EMS and MCZs form part of a wide network of marine protected areas around the coast of Britain.

The Marine and Coastal Access Act 2009 also sets out duties for IFCAs in relation to MPAs.  Eastern IFCA assesses the impacts of commercial fisheries in MPAs and where necessary introduces measures to manage fisheries to ensure they will not have an adverse effect on the integrity of the MPA.

Click on the link (below) to watch video of some of the amazing marine life in our district: Marine life in Cromer Shoal Chalk Beds MCZ, Norfolk.

Eastern IFCA has powers to create byelaws and specify licence conditions to manage fisheries within the district. In 2013, Eastern IFCA agreed its first byelaw specifically designed to prevent fishing activities damaging MPA features: Protected Areas Byelaw. Since then, as the portfolio of MPAs has grown, Eastern IFCA has replaced that byelaw with a new Marine Protected Areas Byelaw. It is envisaged that this byelaw will frequently be amended as Eastern IFCA reviews fishery impacts, fishing activities and the effectiveness of management actions.

Furthermore, before cockle or mussel fisheries are opened in The Wash, studies of the total stock size, density and size-distribution of the shellfish are undertaken. Management measures are implemented through the Wash Fishery Order (1992) and the Wash Emergency Byelaw 2018 to ensure levels of fishing are capped at sustainable levels and will not result in an adverse effect on the integrity of The Wash and North Norfolk Coast European Marine Site.