On 6th July 2022, Defra launched a consultation on the designation of five candidate Highly Protected Marine Areas (HPMAs) in English waters. The proposals cover a diverse range of species and habitats, from intertidal mudflats and biogenic reefs to kelp forests and mosaics of subtidal sedimentary habitats.

HPMAs are a proposed new type of marine designation that would differ from existing Marine Protected Areas. HPMAs are defined “areas of the sea that allow the protection and recovery of marine ecosystems by prohibiting extractive, destructive and depositional uses and allowing only non-damaging levels of other activities to the extent permitted by international law”. This means that all commercial and recreational fishing activities would be prohibited within HPMAs.

None of the proposed HPMAs lies within the Eastern IFCA district. However, the candidate HPMA referred to as “Inner Silver Pits South” lies just beyond 12nm from the mouth of the Humber Estuary: 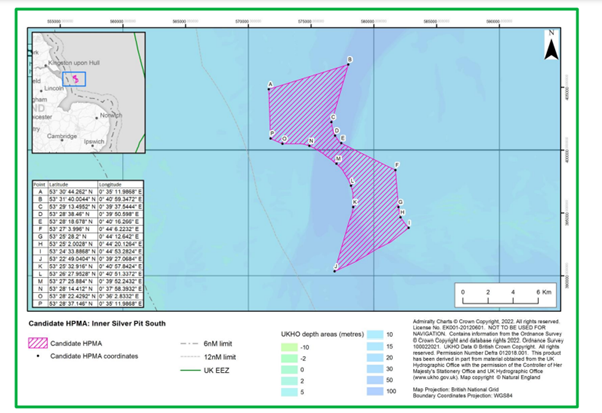 Defra is seeking views from any interested parties, but particularly sea users such as commercial and recreational fishermen, on the proposals to designate these candidate Highly Protected Marine Areas (HPMAs) in English waters. Following this consultation, government will choose which of these to designate.

The consultation is an opportunity to provide your views on the five HPMAs which are candidates for designation, including their boundaries, and provide any relevant evidence you may have. Defra is specifically seeking information on fishing activities within the proposed candidate HPMAs. Your response to this consultation, along with evidence Defra will gather from other sources including site visits, will be taken into account in determining which pilot HPMAs to designate and what the final boundaries of sites will be.

The consultation deadline is: 28th September 2022.

You can find full details of the proposals and respond to the consultation via the Defra website: https://consult.defra.gov.uk/hpma/consultation-on-highly-protected-marine-areas/#:~:text=Overview,full%20recovery%20of%20marine%20ecosystems.