Research Update: The use of trackers to monitor fishing activity in Cromer Shoal Chalk Beds MCZ

As part of ongoing research activities in Cromer Shoal Chalk Beds MCZ, Eastern IFCA has been working with the fishing industry to gather evidence of fishing activity in the MCZ.

Several fishermen who operate in the crab and lobster potting fisheries have agreed to carry trackers aboard their fishing vessels to assist with this important research, the overall aim of which is to build up a picture of fishing activity in the MCZ, to better understand levels of fishing effort, where fishing is concentrated and how fishing activity interacts with the seabed.

“As a crab fisherman from Cromer for several generations, I agreed to have a tracker on board to prove exactly where we fish and how important the Cromer chalk beds are to the local fishing industry and without the chalk and flint seabed which is unique to this area, the fishery would not exist.

Normally fishermen would closely guard this information of where and when they fish but we need to prove the importance of the area to continue to allow the fishing industry to carry on into the future for the next generation.”

To be able to know how fishing activity interacts with the seabed, and how important certain areas of the sea are to fishing communities, it is necessary to have a good idea of where and when fishing happens. In the past, this has been done by a combination of fishermen filling in record forms and books, and people going out and making notes of where fishing is happening – either on the fishing boats themselves, or on patrol boats.

These methods of monitoring fishing activity have big limitations. Fishermen are too busy when at sea to fill in forms, and a small open boat is not a good place to be trying to do this, while recording “after the fact” is subject to the frailties that all human memory suffers from. Recording by “observers” is also limited; there are few observers, they are expensive, and only a very few fishing boats can take observers onboard at any one time. Even if the observers are on patrol boats, similar limitations apply – there are few patrol boats, and they can’t be everywhere at the same time.

Fortunately, there are now technological solutions. The well-established and trusted GPS system, combined with micro-electronics and advancing mobile phone technology, has led to the development of “Trackers” of various types, which record their location on a regular basis, and then either store or download this information. Such trackers have been used in a lot of ways – they’ve been put on fish and birds to record their migrations, they’ve been used on floating buoys to record ocean currents, and they’re used on vehicles, initially as devices to locate and recover stolen cars and trucks. A lot of companies and individuals are also now using trackers to record the position of vehicles for tasks such as fleet management – all the Eastern IFCA vehicles are fitted with a tracker that records location and speed of the vehicle. 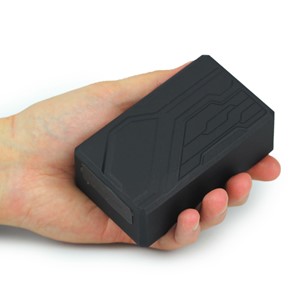 Such trackers have to operate in challenging environments, underneath vehicles, and have to be “fit and forget” (no-one is going to remember to switch them on!). And as there is now a large worldwide market, the units are relatively inexpensive, and with a good track record of reliable operation. We have identified one such unit that could well have applications in recording the position of small boats. This is a rugged, waterproof, self-contained unit, with its own rechargeable battery (so it’s not quite “fit and forget” – it has to be charged about once every two weeks). It is small, and attaches to any suitable surface by means of a magnet

So – what use is regularly updated information about where the tracker is? Well, we have devised a system to process the data so that from sequential positions (in latitude and longitude) we can work out the distance between fixes, and with the time between fixes, we can then work out the speed of the vessel. But again – So what? There are no speed limits at sea. It turns out that the speed and some aspects of the movement of the vessel (such as – Is it travelling in a straight line?) allow us to identify when the vessel was very likely to be setting pots, and when recovering pots.

When we plot up the results, we get a picture like this: 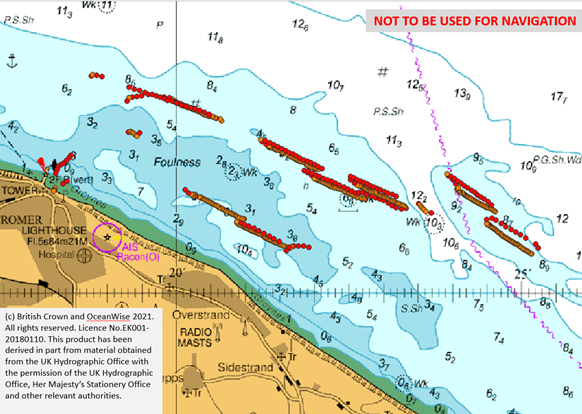 Used with the kind permission of John Davies.

The chart above shows the record for one day. By looking at the speed of the vessel, we deduce that the lines of red dots indicate where pots were being set, and the orange dots, where they were being hauled. Talking with the fisherman, he confirmed that these were the correct locations.

There are some other points that could confuse the picture – for instance, those off Cromer pier. These just indicate where the vessel happened to be travelling at the same speed as it would be when setting pots, as it was slowing down to approach the beach. It still needs a human being to look at the results to interpret them correctly.

From data such as this – and especially when there is data from more fishermen, over a longer period of time – we can start to get a very good picture of the pattern and level of activity, and how best to manage the interaction between fishing and the marine environment in order to best deliver true sustainability – of environment, fish stocks, and important economic and cultural activity.

We can develop our understanding of:

– Which areas of the seabed are important to fishermen, how these areas change over the course of a year, and how they may change year to year.

– What level of potting effort is happening in various areas – and therefore over various habitats – and how this varies over time.

By looking at when pots are set, and then examining results from subsequent days to see when the same pots are hauled, we can understand:

– If any pots have been lost, or left in situ for too long.

– Whether pots move (due to storms etc.) between being set and being hauled.

The fishermen who have agreed to take part in this trial are to be applauded for their forward-looking attitude in working together with all interested parties to develop a management strategy for the Cromer MCZ. The adoption of new ways of doing things, new technology, and adapting to new ways of the world such as the rapidly changing legislation around marine management is always challenging, and it is heartening to see that the fishermen of North Norfolk are willing to rise to this challenge. The quote from local fisherman John Davies at the start of this piece sums this up very nicely.

Better data now will lead to better management in the future. As Theodore Roosevelt once put it, “the more you know about the past, the better prepared you are for the future”.