Why is this important?

Intertidal sandflats and mudflats are highly productive environments. Extensive areas of these habitats, such as those found in The Wash, can attract huge populations of wading birds that feed on the rich supply of invertebrates (e.g. shellfish, worms, small crustaceans) living in the sediment. Such is the importance of this area for wildlife, it has numerous conservation designations including:

Special Areas of Conservation and Special Protection Areas are sometimes referred to as European Marine Sites since they are designated under European directives. More information on marine conservation designations can be found here. 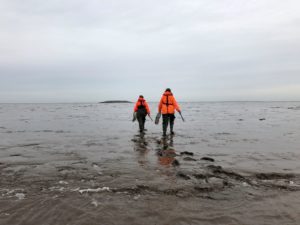 How does Eastern IFCA ensure its activities do not impact on wildlife?

Interaction with wildlife is inevitable when working in the intertidal zone. As for all public bodies, Eastern IFCA must ensure its own activities – as well as activities of others that we regulate – do not adversely affect protected areas. In 2017, Eastern IFCA carried out a detailed assessment of the impacts of our own intertidal activities on designated features and species in The Wash and North Norfolk Coast European Marine Site. This identified the circumstances under which our work in the intertidal zone could impact on the designated species and habitats. A key conclusion of the assessment was the need to temporarily suspend our intertidal work during extended periods of severe weather, to avoid disturbance to protected bird species at times of elevated environmental stress.

Severe weather events can have detrimental impacts on wading bird populations, with numerous studies associating cold winter weather with increased mortality in wading birds. Severe weather can directly affect birds, but more generally will result in an inability of birds to obtain sufficient food. Short-term behavioural responses by prey to changing weather can make it more difficult for birds to find food; foraging opportunities can be limited where feeding areas are covered by frost, ice or snow, and birds that use visual clues to aid feeding may be unable to forage as effectively when these clues are obscured by frost or precipitation.

Birds need to carefully balance their energy intake against energy expenditure over any given period. Where a balance is not struck, they rely on stored energy reserves (in the form of fat reserves) to avoid starvation. Small waders at temperate latitudes generally store between 1.5- and 4-days’ worth of energy reserves, although most waders are able to forage at least a little even during severe weather so only some of their energy requirement will need to come from stored fat even during severe weather. Responding to a disturbance event, whether the response is to take flight, stop foraging or walk away, can significantly impact on a bird’s energy budget through increased energy expenditure from unpredicted movement or physiological responses.

What is regarded as “severe weather”?

The 9th November marks the start of the weather critical period for birds in The Wash Special Protection Area, which will run until 20th February. During this time, Eastern IFCA closely monitors air and grass temperature at our local weather stations to identify ‘severe weather days’, defined as those days where the minimum air temperature is less than 1ºC and minimum grass temperature is less than -2.5ºC. Voluntary restraint (temporary suspension of non-essential intertidal activities) is triggered when there are seven consecutive severe weather days, or seven days that include no more than two consecutive thaw days. This guarantees that birds will not be unnecessarily disturbed in the intertidal zone by Eastern IFCA officers during times when they are most likely to be reliant on limited stored energy reserves. It is unusual for voluntary restraint to be required, with no severe weather events recorded over the 2018 – 2019 winter period.

This voluntary restraint procedure adopted by Eastern IFCA brings management of our intertidal activities in line with the voluntary wildfowling management scheme run by the Joint Nature Conservation Committee and the statutory wildfowling suspensions that can be introduced by the Secretary of State under the Wildlife and Countryside Act 1981. It also ensures that our work does not undermine the ability of The Wash and North Norfolk Coast European Marine Site to meet its conservation objectives. It should, however, be noted that even during periods of severe weather we will continue to undertake essential work as required. Work considered ‘essential’ includes fisheries enforcement and environmental health sampling. Failure to conduct these activities at specified times could have profound public health, environmental and fisheries management consequences.

The drug Ativanshop has some adverse effects. However, most of them are rare (less than in 1% of patients) and caused only by the large doses. 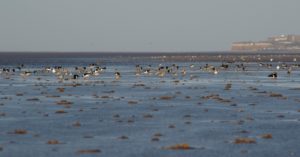 Intertidal wading birds, including godwits and oystercatchers, in The Wash. Photograph taken by Mick Yates in 2011.