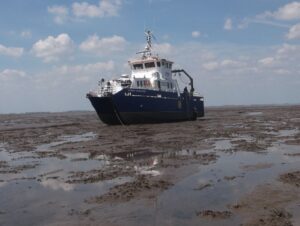 Eastern IFCA is working in conjunction with the fishing industry to undertake additional surveys of cockle and mussel stocks in The Wash as part of work to further explore the possibility of opening the 2022 cockle fishery.

This is in response to concerns raised by the fishing industry over the results of Eastern IFCA’s 2022 cockle surveys which show that the stocks in the regulated fishery are unable to support a cockle fishery this year (see Sustainability of Fisheries in The Wash).

Following the publication of the survey report which led to a recommendation to the full Authority  that both the cockle fishery and the dredged mussel re-laying dredge fisheries are not opened this year, fishermen have come forward with representations about beds which they have identified could potentially contribute to meeting the bird-food-model threshold.

Recognising the impacts that the absence of an annual cockle fishery would have, especially at a time when the inshore fishing industry is facing significant external pressures such as rising fuel and living costs, Eastern IFCA is working closely with the industry members to conduct additional surveys based on industry knowledge of The Wash.

One of the successfully completed surveys has identified approximately 1,200 tonnes of mussel, some of which will provide additional stock which can contribute to the bird-food-model. Alongside this officers are working with Natural England and others to check the accuracy of data used in the model and the potential for revising some of the parameters for supporting data.

Whilst it may be possible to meet the bird-food-model threshold, cockle stocks are low and are spread in lower densities than would ordinarily support a viable fishery. In addition, young cockles need to be protected this year to support fisheries in future years, but Eastern IFCA will work with industry members to explore options for opening a fishery.