Eastern IFCA has launched a consultation to seek the views of Wash fishermen on the potential for opening a hand-worked cockle fishery and mussel re-laying fishery this year. The consultation is seeking views not only on whether the fisheries should be opened but also on the proposed management measures intended to protect future years’ cockle fisheries.

A consultation package including a letter, questionnaire and summaries of the stock status and management measures proposals have been sent via post to all Wash Fishery Order (WFO) entitlement holders and skippers.

The deadline for responses is Wednesday 6th July 2022.

Eastern IFCA’s Update report, which includes a Risk Assessment to address in detail the risks, benefits, and implications of a cockle fishery and of no cockle fishery this year, is available through the following link: [here]

In summary, the Risk Assessment identifies the following key points which we are seeking the views of the fishing industry on:

– In addition, not opening a fishery could cause displacement into other fisheries with impacts on sustainability and the viability of those who rely on them

– Opening a fishery will not cause the cockle stock to collapse

– Because of the low density of adult cockles in The Wash, opening a fishery this year will likely lead to the removal of smaller cockles which would  ordinarily be the basis for the fishery next year, and the year after

– The mitigation measures proposed (see below) will have a limited protective effect, but the fishery would reduce the available cockle for next two cockle fisheries

– Therefore, opening a fishery poses a risk to industry viability next year and the year after.

In order to inform a decision on the best way forward and in view of the complexity of the current situation, we are seeking the views of the fishing industry on whether we should open a cockle fishery or not, and on the management measures proposed by the Wash Fishery Stakeholder Group to mitigate any risks to future fisheries.

Why is not opening the fisheries under consideration?

(1) Stocks did not provide sufficient food for over-wintering birds which are protected within The Wash; and

(2) Adult cockles are in very low density and unlikely to support a viable fishery without removal of smaller, pre-spawning cockles which could impact on future fisheries

The first issue relating to food availability for designated birds has been resolved after an error was identified in one of the bird counts which artificially inflated the number of oystercatchers and skewed calculations under the bird-food-model used to ensure sufficient stocks for overwintering birds. This issue no longer represents a barrier to the fishery opening.

However, the second issue remains a cause for concern and a potential barrier to a successful fishery this year and sustainable fisheries in the future. Additional surveys conducted by Eastern IFCA, and data provided by industry has not significantly changed the picture provided by the Authority’s stock assessment. Low density adult stock means that the fishery will potentially target smaller cockles which would risk future fisheries.

What is the Wash Fishery Stakeholder Group and what are they proposing?

The Wash Fishery Stakeholder Group was convened following the last meeting of the full Authority on 8th June 2022 in response the concerns raised about the limited prospects of opening a cockle or mussel re-laying fishery this year and to discuss proposals to address the barriers identified above. The Group is made up of six industry representatives, Eastern IFCA officers, and several Authority members, including those from the Wash fishing industry.

The Group has developed a proposal for a cockle fishery this year. Noting the risk posed to future cockle fisheries linked to the status of the stocks, the proposal includes measures which would reduce the risk of smaller cockles being overfished to the detriment of future fisheries.

These measures can be found in the Management Summary below.

What can be expected?

To decide on the matter quickly and maximise the time available for any potential fishery, the Group agreed to hold a short consultation, with the deadline for responses being Wednesday 6 July 2022.

The Group also agreed to waiver the usual 7-days’ notice of the opening of a fishery should the decision be taken to open the fishery, again to ensure that time available for a fishery is maximised.

Following a consideration of the responses to the consultation, should a decision be taken to open a fishery, we anticipate that this would likely be in late July due to the available tides.

We will continue to provide updates on any progress and developments. 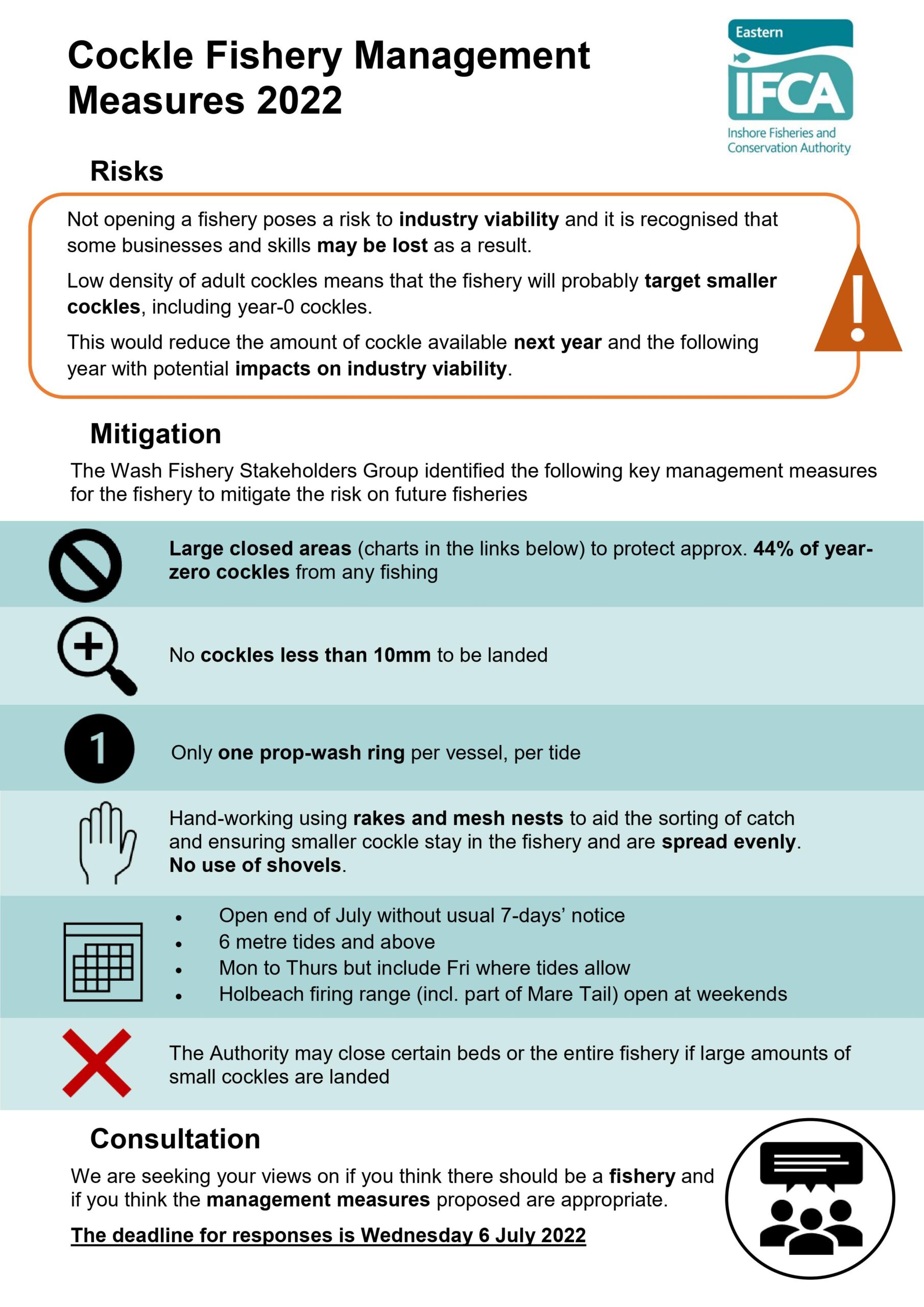 The charts showing the proposed areas to be closed to the 2022 hand-worked cockle fishery can be found here: [charts]