Habitat mapping to understand where  sensitive (“rugged”) chalk features are located are one of our main research priorities. Understanding where the rugged chalk is located is critical to developing appropriate and proportionate management (if required). This is because the more accurately we can map rugged  chalk features, the less precautionary we need to be.

After Eastern IFCA received the new  conservation advice from NE in August 2020, officers completed a desk-based study mapping the extent of rugged chalk based on available evidence. The output of this study was a precautionary rugged chalk area (see image below). This area was precautionary because most of the data available was from areas outside of the inshore section of the MCZ where, rugged chalk is known to occur based on expert knowledge from fishers and divers.

In July 2021, Eastern IFCA purchased a BlueROV2 (pictured below), an underwater drone designed to take videos of the seabed. We completed 87 seabed surveys using this ROV in August and September 2021, whilst testing its capabilities. These surveys aimed to provide information on chalk habitats in areas where there were evidence gaps, so were focused on the inshore section of the MCZ. Following the surveys, the Research & Development Task & Finish Group developed a protocol for the analysis of footage (December 2021).

A Cefas project funded by Natural England in 2021 involved the re-analysis of raw data from multibeam surveys using a higher resolution for the output than the existing product, thus providing a clearer definition of the features. This re-analysis also determined how rugose the seabed is, by examining the deepest and shallowest points of seabed within neighbouring 0.25m x 0.25 m cells. This analysis of rugosity aimed to distinguish areas of rugged seabed from those of smooth or gently sloping / rolling seabed (the report is pending publication).

Video footage collected during the 2021 ROV surveys has now been analysed by an external contractor (funded by Natural England) and the results have been presented in a final report (available here). More habitat surveys using the ROV were conducted during summer 2022 to build on the current evidence base. These were focused on areas where we had large data gaps and along the boundary of the rugged chalk to further refine it. Examples of the different type of habitats found within the MCZ are pictured below. 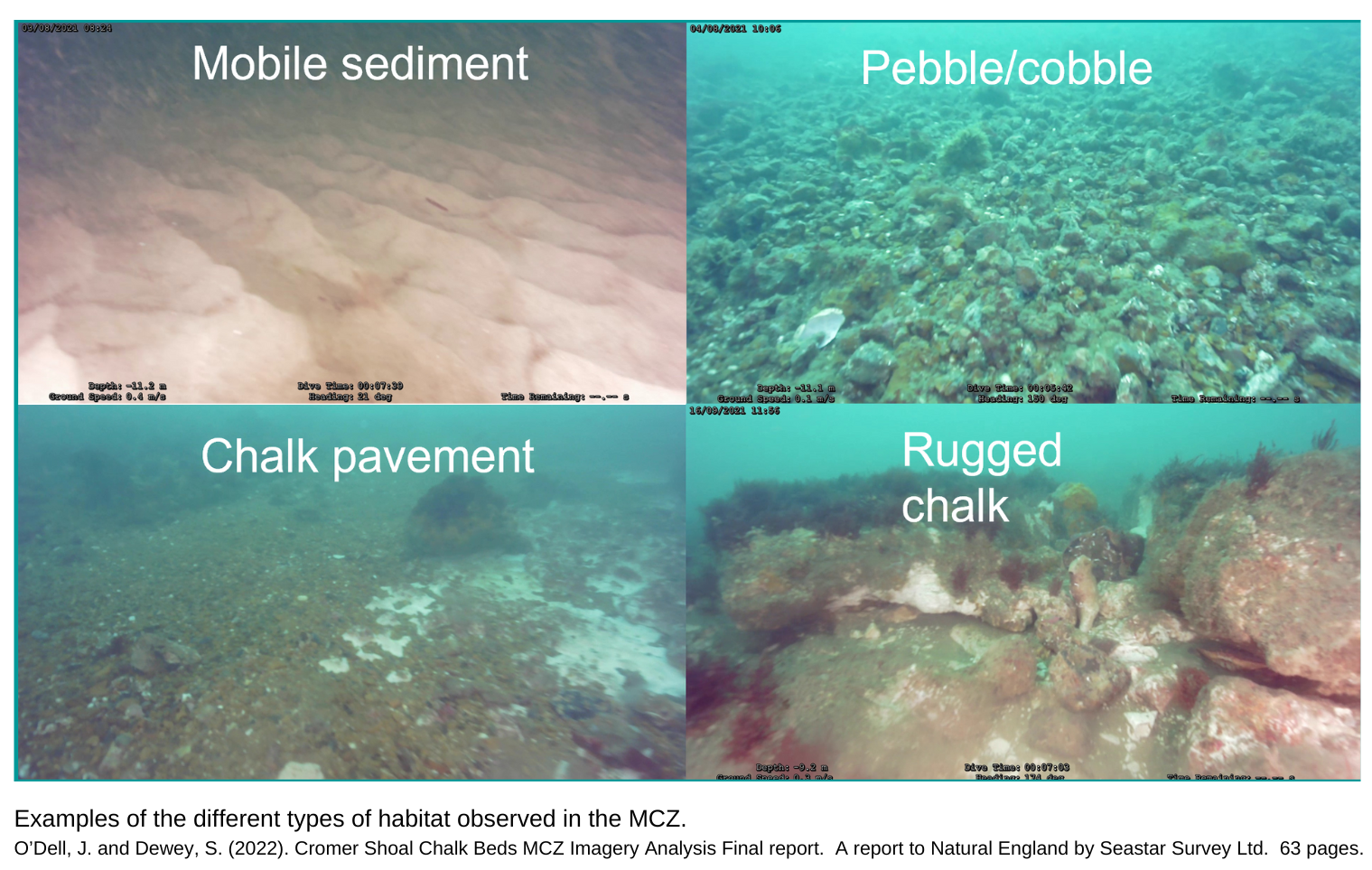