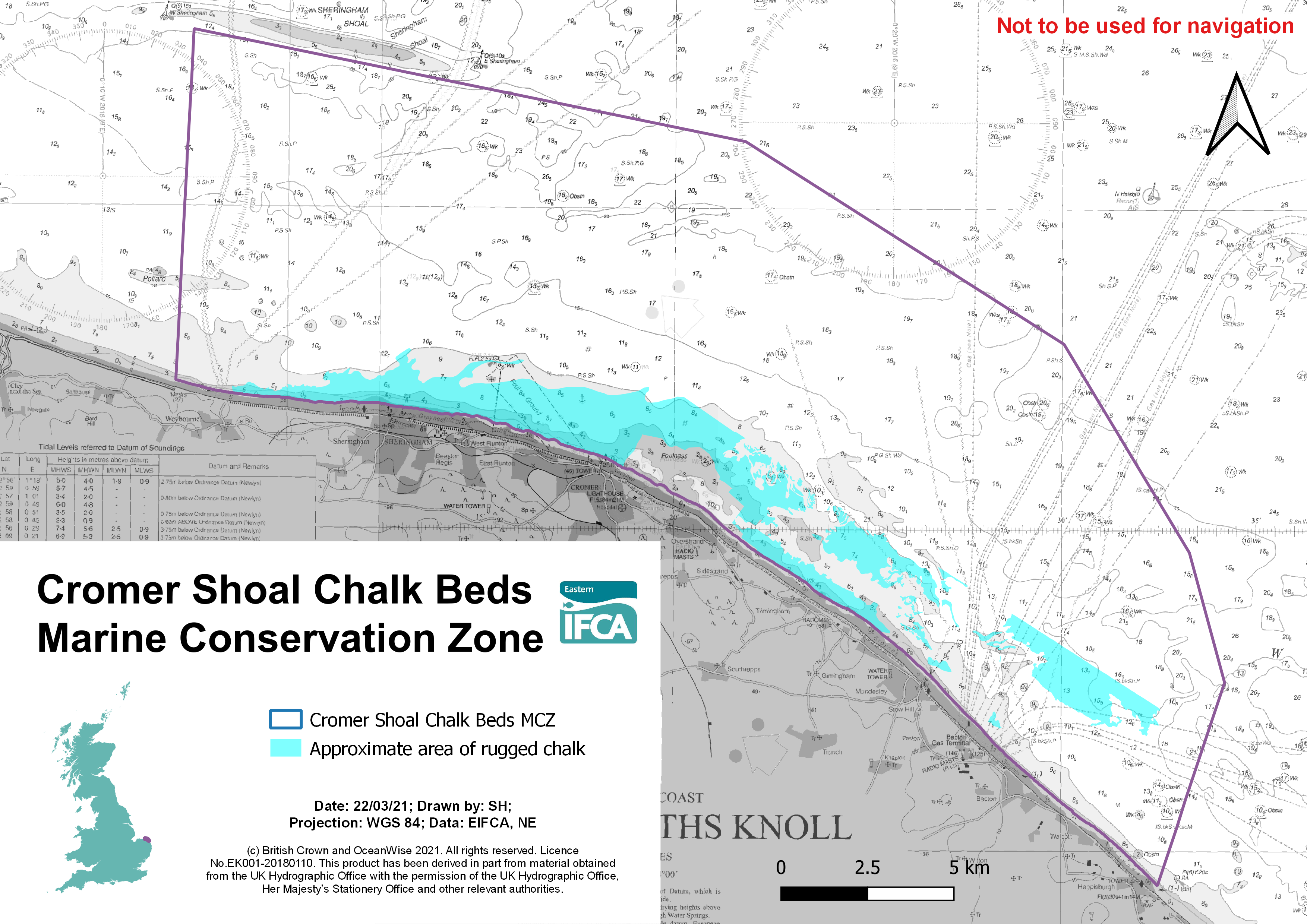 The Cromer Shoal Chalk Beds Marine Conservation Zone (MCZ) is a one of 20 marine protected areas  that exist, exclusively or in part, within Eastern IFCA’s district and which form a continuous belt of designation in the waters of the East Anglian coast.

Marine protected areas are a network of sites designated to protect specific features, habitats, or species, within which activities are ‘managed to achieve long-term nature conservation and sustainable use’ (JNCC 2019). You can find out more about the other marine protected areas in our district here.

The Cromer Shoal Chalk Beds MCZ extends along the Norfolk coast from just west of Weybourne to Happisburgh, extending around 10km out to sea and covering an area of 321km2. The site was designated in 2016 to protect a range of seabed habitats including chalk, sand and gravel, and small areas of peat and clay.  The southern North Sea mostly contains soft sediment habitats, so the rocky chalk seabed in the MCZ is unusual for this region.  The chalk structures are associated with higher biodiversity than surrounding sediment habitats, because they provide an attachment surface for many plants and animals (e.g. seaweed and sponges) and shelter for mobile species (e.g. fish and crustaceans), including the commercially targeted crabs and lobsters.

When the MCZ was being considered for designation, the generally accepted understanding, based upon evidence available at the time, was that fishing using pots did not have a damaging effect on hard seabeds such as rock. It was therefore suggested at the time that, should the site be designated, there would be no need for restrictions on commercial potting activity within the site. This provided reassurance to stakeholders that supporting the MCZ designation would not lead to impacts on the local fisheries.

The main commercial fishing activity that occurs within the MCZ targets Brown Crab (Cancer Pagurus) and European Lobster (Homarus Gammarus). Fishing has occurred within what is now the MCZ for many generations and continues to be very important socially and economically to the area, supporting local fishing and tourism businesses and as an integral part of the local heritage. Read more about the history of fishing along the North Norfolk Coast using the links below.

Crabs and lobsters are typically fished in the MCZ from beach-launched vessels that are under 10 metres in length, and often worked single-handed. The crabs and lobsters are caught using pots made from steel, plastic and/or wood. The pots are connected by rope with an anchor and a buoy at each end. These strings of pots are called ‘shanks’. There may be between 10 and 40 pots per shank. Pots are baited and then “set” at sea at locations determined by local knowledge and experience, then left for a period (typically a few days) before being hauled (lifted out of the water) and the catch emptied and sorted.  Undersized crabs and lobsters are returned to the sea immediately, as are soft-shelled or egg-bearing individuals. There is little to no bycatch associated with this fishing method. The overall scale of the fishery (e.g. number of pots used per vessel) has increased over time although catch per unit effort (the number of crabs/lobsters caught relative to the level of activity) has remained relatively stable.

The fishery is prosecuted by some fishermen year-round, but the main season is between late March to October with typically a slower period over the winter months, following the activity of the crabs.

In 2018, Eastern IFCA assessed the impact of commercial fisheries on the MCZ. At that time, potting was not found to hinder the conservation objectives of the site. However, subsequent evidence has been identified that links potting fisheries to physical damage to chalk outcrops. In August 2020, the statutory nature conservation body, Natural England, provided Eastern IFCA with formal advice about the impact of crab and lobster pot fishing within the Cromer Shoal MCZ.

In summary, a study conducted in 2019 by Natural England and the University of Essex found that potting activity can damage rugged chalk (the raised structures of exposed chalk that are found in the inshore part of the MCZ). Although individual incidents of damage are small, collectively their effect hinders the conservation objectives of the MCZ (the reasons why the site was designated). Pots that are left in the water for longer periods, particularly if they are lost, are the most damaging.

Read a summary of the advice from Natural England here.

Eastern IFCA are committed to working closely with the fishing industry and Natural England in a collaborative approach to better understand and mitigate the impact of potting on the chalk whilst also seeking to minimise impacts on industry.

The way forward as advised by Natural England is through an Adaptive Risk Management (ARM) approach, i.e. not an immediate ban on potting activity, but a commitment to management alongside research.

ARM requires further research and monitoring of the habitats and potting activity, and the effects of their interaction. It will require input from fishermen to be successful and ensure the best outcome. To provide space and time for this collaborative work, three interconnected groups have been established to carry the work forward:

Keep up to date with regular updates on the ARM work as it progresses by following along with our news page. Direct links to all Cromer Shoal MCZ related news posted on our main news page can be found below. There will be quick updates posted, directed primarily at stakeholders, about the work underway.

To speak to an officer at Eastern IFCA about this work, please contact us.